Miracle Mile!  According to the LA Times, “As wealth and newcomers poured into the fast-growing city, Ross’s parcel became one of Los Angeles’s most desirable areas. Acclaimed as “America’s Champs-Élysées,” this stretch of Wilshire near the La Brea Tar Pits was named “Miracle Mile” for its improbable rise to prominence. ”  Join us as we take you on our audio walking tour of one of our favorite places in L.A. Wilshire Blvd, AKA, Miracle Mile.  Tune in and learn a little history and haunted history about L.A.’s once-famous place to shop and venture.  What former department store was used for a scene in 1984’s, Ghostbusters, what former museum witnessed a horrific murder, and which former department has some unusual haunts?  Tune in to find out! 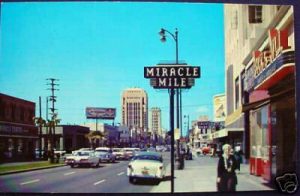